By Chris Kline August 03, 2008
I'm white trash. I admit it. I'm comfortable with it, even. How liberating to proclaim!

As promised, I took a group of dads and their kids to the county-fair Demolition Derby. It was so much fun! I had never been, and really had no idea what to expect. After a lengthy trip to Burger King for some nutritious dinner (took 15 min to get the first order served, so be very careful at the Ken-Pratt location if you're in any sort of hurry), we made our way over to the fairgrounds. Parking was a disaster. Without nice little white lines to guide us, we are apparently a fallen society. People were parked pretty much everywhere, usually with about 7 feet between cars, just so there wasn't room for another car. I wound up parking in the race-team pit area. 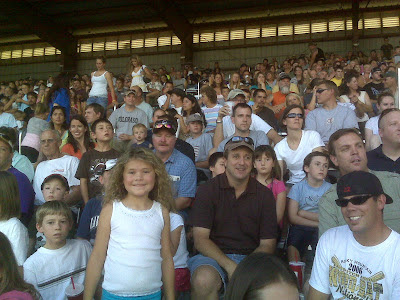 But once things finally got started, WE HAD FUN! You all obviously know that the basic tenet of such an event is for the cars to cream one another. But, come to find out, there are actually rules to the whole thing! They begin each heat with 8-12 cars or so all stationed around a perimeter, facing away. Then, when the green flag is waved, they all back up towards a stake at the center as fast as they can. Then the smashing commences. You're not allowed to hit on the driver's side, and you're not very smart to hit head on since your own radiator will surely be toasted. Beyond that, not many other rules exist. (There was, though, one rule that went something like "don't run over the judges" that almost got broken a couple of times and thus the big black flag got waved, signaling the offender's disqualification.) 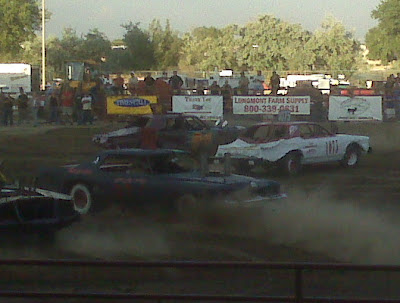 They had a compact and full-size class. The initial heats went until only 4 cars remained mobile. The immobilized vehicles had little colored sticks to display, indicating that they were out and should no longer be rammed. 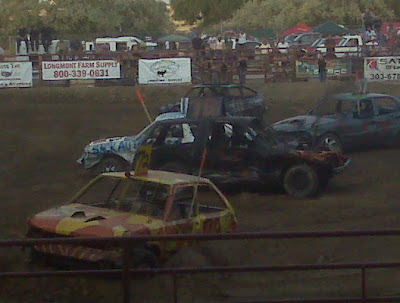 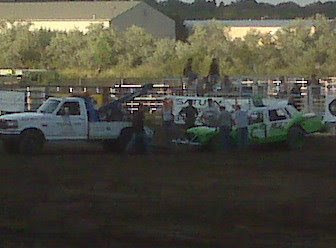 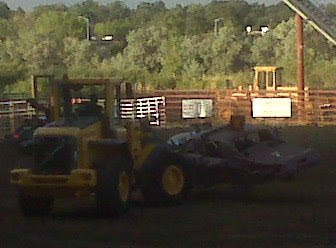 At the end of the heat, the winners drove off, and the losers got towed off or hauled off by a loader. A handful of the drivers were really quite good. One even advanced to the next round by driving around and whacking others after he lost a wheel on his own car. Pretty funny stuff.

Then you rinse, lather, repeat until you're at the final round. The final round was SOOOOO LOUD. There were 15 cars, with probably 500 horsepower each, all trying to kill each other.
Several of the more-skilled drivers had some pretty interesting tactics, and it took quite a while to get a winner. He did win $2500 for his trouble, however, which is a nice take away for not getting sent to the hospital.

This is my friend, Mark. 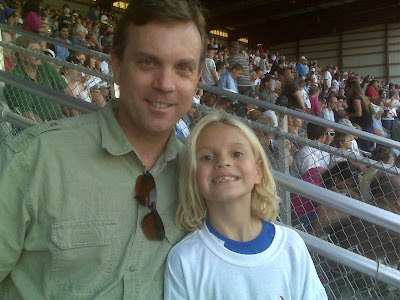 In between bashing-sessions, the crew would come out and launch t-shirts up into the stands with those huge slingshots you see at professional sports matches. The kids were so excited that they might get one. I can't count how many times I heard "Get one, Dad!!!", as though I could just reach out and get one whenever I chose. Luck wasn't on my side, but Mark caught one, and since he left his kids home for the evening, he gave it to Misha. (I couldn't fathom why he wouldn't ABSOLUTELY need such a high-quality t-shirt.) Misha was as happy as I've seen her in a long time. Ear-to-ear grin! Way to go, Mark.

And so now Misha is the proud owner of a "I got smashed at the demolition derby" t-shirt. We need another white-trash activity since we'll now be properly attired.

In between another session, they had a bunch of kids come down onto the field and race tires from one end to the other. Amy gave it a shot, and though she was somewhere in the bottom 30% of finishers, she was happy to have participated, and for the free fair tokens she got in return. 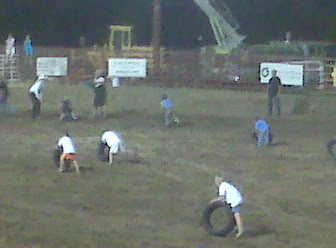 To sum it all up, we had a fabulous time! Well worth my $35 and crummy parking arrangement. We'll go again next year, I hope. My kids got a little testosterone boost, and I went hoarse from hooting and hollering. Time to start shopping for an appropriate t-shirt to wear next year.

Jolayne said…
I think the little girls had just as much fun as the big boys! You gave a great description of the mechanics of it all.
August 3, 2008 at 9:09 PM

Lori said…
Holy cats, that looks like quite the event. I also like to see that you added the tag "white trash" at the bottom.
When i was in college me and my roommates used to dress up like white trash to see the monster truck rallies and we always had a good time.
August 3, 2008 at 11:20 PM