Showing posts from September, 2009
Show all

By Chris Kline September 15, 2009
My sister posted this on her blog, and I liked it enough to repost. Cool story.
Post a Comment
Read more

By Chris Kline September 09, 2009
So as to not sound like I'm just ranting all the time, I'll depart from recent topics for this episode. As Jolayne mentioned , we took the kids to the Air Force Academy last weekend. Whenever visiting a base or seeing a display, I'm in awe at the power of the US military. It's not because of the size of the guns they carry; it's because of what they teach. They teach lessons that much of America seems to have forgotten. There's much wrong in the military, as everywhere. But there's still some things they teach that are spot on. At the academies especially, they teach you to become better than you are. While at the visitors center, we came upon a display about the Honor Code. It's a simple code: We will not lie, steal, or cheat, nor tolerate among us anyone who does. For some reason, it was a powerful thing for me to read. It reminded me of the honor code while I was at BYU. At the time, I often resented certain implications of the big-brot
2 comments
Read more

By Chris Kline September 09, 2009
Recycled Napkins. Have you ever noticed that they're more like plastic than paper and that all they really do is squish the goo you're trying to wipe all over? Are we really saving mother earth by using them? Since nearly all paper is grown from trees specifically grown for that purpose, I have trouble understanding how we're barreling towards certain Al-Goreian destruction by using real napkins. Educate me, please.
Post a Comment
Read more 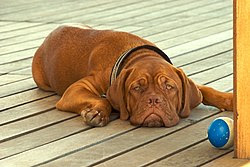 It's been a month and if I'm really honest I haven't had many useful ideas to share with the entire Internet recently. Alas, spending the last few weeks among the masses of America has solved that problem. Let me start by stating clearly that I like dogs. I really do. I had dogs growing up and I loved them dearly. I just don't like YOUR DOG IN PUBLIC. Now let me explain. Over the last couple weeks I've witnessed people doing some really strange things with their dogs in public. It's been so weird that it's time I spoke up (you know, as part of that whole be-a-good-citizen-thing.) First, last week a guy brought his two HUGE mastiffs (think Turner and Hooch) into the small office at the local Jiffy Lube while I was waiting to get my oil changed. To begin with, this was socially unacceptable. These dogs were huge and they drool like it's totally in style. The guy (a twenty something frat-boy looking type) kinda smiles at me with a "yeah-I
5 comments
Read more
More posts