Got HD? How About For Free!

By Chris Kline June 15, 2008
WARNING: This isn't the most funny or entertaining post ever. I basically wanted to document some stuff I learned recently in case I needed it again, and putting it here made sense since both my readers might like to know it's available, though not perhaps necessarily for immediate consumption.

Not too long ago, I finally got a new digital TV for the basement. As part of that activity, it was time to figure out about all this HD business. Though I'm usually pretty savvy with such stuff, I hadn't paid much attention to the HD thing and found myself in trouble. Thanks to Mitch for helping me sort it all out without laughing at all. So I'm going with Plan B.

What's Plan B, you ask? No, it's nothing to do with birth control (phew!). It's my homemade HD antenna. I'm still a little too cheap to pony up to Dish Network an extra $20 for the privilege of watching signals in HD. It doesn't make much sense to me since the government is mandating that all signals be digital next year anyhow. But, true to the cable/dish industry's mantra ("never miss a chance to stick it to 'em"), they think I really want to pay even more than I'm already extorted for that service. Until I'm beat down to a point where I'll concede and give them unfettered access to my bank account, I'll stick with Plan B. 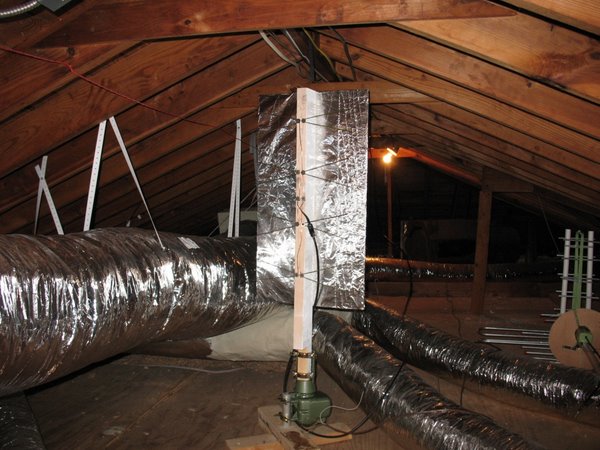 For under five bucks, I made an antenna that works super-fabulous-good and gives me all the over-the-air HD channels completely gratis. Take that, Dish Network! In addition to the regular networks, I can now watch any of 5 Spanish channels whenever I want (cuz I was disappointed with the 13 I already get on DN, not speaking Spanish and all).

By the way, that picture isn't my house. It's off this great site that teaches complete HD idiots to build antennas themselves, saving the $50-100 cost of buying one that won't even work as well (yes, the homemade ones actually work better than store-bought). You can use that link to learn about the details, but I was able to build mine in an hour using dry-cleaning hangers and leftover junk in the garage. The cost really is only in the coax connector/transformer (officially called a 75-300 Ohm Transformer or Balun), which you can get at radio shack for under $5. The kids had fun helping me. Here's even a video that explains how to do it in minute detail:


Here's a picture of the one Mitch built, which gives a good view. Mine is in the garage attic and I don't feel like climbing up to 100-degree space just to take a picture for you. Notice the cooling racks; very good use of kitchen stuff. I had to buy Jolayne new cooling racks after I built mine, but it was in the plan. :-) Good thing Mother's Day was at the same time. Her spiffy new racks even FOLD. Bottom line for Plan B. It works, beautifully. I just switch my TV input to "tuner" and now I get all the local channels in HD. No change to DN programming just yet. Since I was an HD idiot and Mitch had to help me out, I'll warn you: you have to search on different channels when you're doing digital (you can't just put in "7" and expect channel 7 to pop up in digital). On my TV, it had a search mode for digital only, and the channels have two parts to them (like "7-1"). In fact, with digital signals, the networks can broadcast subchannels, so one of the locals has a weather-only channel they broadcast now ("9-2" or something). Also, as Mitch politely pointed out, you can't get fuzzy reception on digital channels. Either it works or it doesn't. Fuzz/snow is for analog. If digital signals are weak, you'll get pixilation or freezing, similar to what happens when you download a video clip online and it's slow.

If you live in Colorado and want some background on it, the local networks only began pushing HD signals over the air in May. Before that, there was a massive argument over the new antenna they had to build on Lookout Mountain, and the rich dudes basically forced an act of Congress (no joke here) to get it built. Didn't want to ruin their view, you see. Anyway, it's all done now and you can use AntennaWeb to see where you'd need to point your antenna to get the best reception. You plug in your address and whether you have a good line of site, and it'll tell you which signals you should be able to receive, and from what direction.

Final note. You may have seen the notices about how the government is mandating all analog TV broadcasts be shifted to digital in Feb 2009. If you get your TV over cable or satellite you don't need to do anything. If you watch over the air, you'll either need a TV that can receive digital signals (HD), which is pretty much any TV sold in the past 3-4 years, or you'll need a converter box that will transform the new digital signal back to something analog for your older TV. The government is providing vouchers to help offset the cost of these converters, and you can get one here if you still prefer the dark ages. But I'll probably mock you for it now that I'm mainstream 21st century. Thanks, Mitch.

This concludes my braindump on what I've learned about HD signals. Enjoy.
DIY HDTV tech stuff tv
Chris Kline
I like to share what I learn, and I like to learn from others.

kevandcan said…
OK, so I tried this and the resulting quality is AMAZING! I'm so glad you pushed me in this direction. No I have no reason to go to cable/satellite and the antenna only cost me about $10 to make. Thanks!
July 31, 2008 at 6:43 PM