Dinner and a Show

By Chris Kline October 23, 2008
It's been a couple weeks since I've come up with anything witty enough to be publicly shared. Even now, no wit is to be found between my ears. But I have to share something anyway. Tonight, however, I was walking around Portland when I stumbled on a Macaroni Grill. Yum, I thought, so I doubled back and went in. After ordering, I was settling into the page-turning USAA magazine (it's a freeby from my insurance company; just shows how pathetic I've become).

I'd cleverly thought to bring along for some 8/5x11 dinner companionship when the waitress mentioned something going on directly across the street, directly across from my window. Some guy apparently had another guy in a sleeper hold, with a good 15-20 people standing by watching. Apparently, in Portland, that's a perfectly acceptable behavior. From my vantage point, it seemed like one of the onlookers was a security guard. Also, apparently, interdiction wasn't part of his job. A few minutes later, a single cop jogs up. Then, moments later, a couple cop cars roll up, code 3. As if that wasn't enough, transit police then showed. Fast forward a few more minutes and there were about a dozen cops. Bike cop then rolls up. This was getting entertaining. All it really needed was more cops. 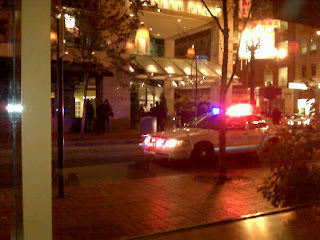 Next, (and I'm not making this up) a hook-and-ladder fire engine pulls up. My joke was that they needed the long ladder in order to get in close because there were so many cops. Why on earth do you need a block-long fire engine for such an event?! Few more minutes pass and then finally the ambulance shows up. That order seem a little backwards to anyone else?

For the next 20 minutes, there was all sorts of hussle outside, but the strobes got a little annoying after I started twitching nervously... :-) Not entirely sure what happened in the end, but they eventually loaded a guy into an ambulance. Couldn't see too well after the blindness settled in from those strobes.

I don't generally enjoy going out to eat alone, for obvious reasons (I have no friends). But tonight, with my trusty companion USAA magazine (yawn) and the entertainment outside, it wasn't bad. The grilled salmon was quite good, too.