By Chris Kline August 29, 2010
When I was a kid, my parents taught me in the ways of the force by having me scoop dog poop and mow the lawn on our hilly yard. I hated it. No, I loathed it. Now as I raise my own kids, and though we don't have any animals, it's fun to pass down the tortuous activities.

A month or so ago I decided Amy was old enough to learn how to check, start, and run the mower. At first it was fun for her, new activity and all. I had her help me push the mower around the yard, and she enjoyed helping her dad out. Shortly after that I informed her that it was her turn to mow the front yard all by herself. Insert weeping, wailing, and general girl drama. However, after a tough 20-30 minutes, she got it done. Since then, I've had her do it a couple more times, and though the wailing and drama always precede the work, Amy has really stepped up to get it done. It's made me proud of her. Pushing that no-frills mower around our not-flat yard isn't easy. I'm sure it's even more challenging when the mower weighs as much as you do! 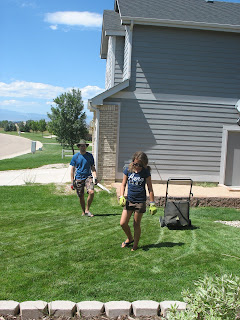 After she got done last week, Jo snapped a couple photos. It was hot, and she was definitely wiped. She had just enough energy left for a dramatic flail in the yard. But the yard looked great! 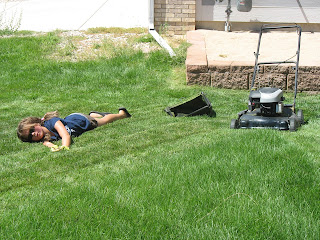 Each week right now I'm amazed at how much grass has grown. I've even debated calling the TruGreen guys and canceling because my grass is too green! Not sure they've ever heard that excuse before. But I'm thinking grass that's a little less green would be faster to mow, for sure.

Turns out that all the training Amy received in our yard recently came in most handy. We have a lady at church who's not able to care for her own large yard right now. Amy has gone with me several times to help mow it. She was admittedly glad that she already knew how to run the push mower (and it was much easier on a flat yard). She also happily managed the rite of passage by learning how to pilot the riding mower. She was grinning ear to ear the first time we did that. However, the mean old landlady at the farm we were on tried really hard to keep Amy from being happy but thinking up the most ridiculous things to make a fuss over. I was proud of the way Amy didn't let any of the senseless chiding bring her down.

My kids are getting bigger, and it's fun to do new things with them, even if they do involve work. Now we're just missing the dog poop.
Amy
Chris Kline
I like to share what I learn, and I like to learn from others.

Lori said…
Mowing's such a good chore to do. The yard looks great when you're done, and it's really not all that hard of a task to complete usually. I'm glad that your girls get to take part in the glory that is mowing and yardwork :)
September 3, 2010 at 7:55 PM