By Chris Kline December 07, 2009
A couple years ago, Jo and I decided to take the two older girls skiing for scout ski days. It's not the kind of thing we typically do, for lots of reasons. The day didn't go so well. It was super-de-dooper cold and the kids didn't eat anything good before we started. After one try down the hill, they were done, and so was our day.

Last weekend I decided to try my luck once more, but learned from my previous mistakes, maybe. It was again Scout Ski Day, where you can get a lift pass and free lunch for $25. How can you pass on that when it can easily cost triple on a normal day? To boot, Amy is in fifth grade and gets a free pass from the ski people. Double bonus. So we had to go.

First, it was just Amy and Misha with Dad this time. A little quality bonding time. Jo doesn't have any love affair with snow. My coworker was kind enough to let us stay at her condo so we could avoid the morning drive and enjoy a more leisurely morning. We wanted to leave by 5, and in normal fashion, it was closer to 7 by the time we got on the road. We got up to Silverthorne around 8:30 after passing several accidents and slowdowns. Our major issue of the night was that the address we'd been given didn't actually exist! I tried getting through to my coworker but since she was on vacation herself, wasn't able to. So I did the next logical thing (I thought). I figured the address was a typo and started trying garage codes on nearby units. I only selected units that didn't have snow tire tracks, since I knew no one had been there recently. After my fifth or so try, I found the right place and it worked. I think the kids were slightly freaked that Dad might get arrested for attempted breakin, though. We then had a ni 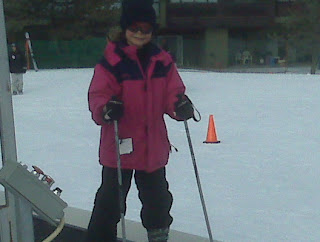 ce evening at the condo.

The next day, I had planned to get the kids into ski lessons, but overnight I realized I could save $250 by not doing that part and trying to teach them myself. I'm cheap, what can I say. The kids were fine with the decision. In fact, they were happy to spend more time together with me. Wow, surprising. I also cheaped out on rentals and went to Sports Authority in town instead of renting on the hill; I saved 50% on that.

On to the good part:

We finally got onto the hill around 11:00am. The green mountain (easy side) wasn't open for the season yet (still less than two feet of snow, though I bet that's changing rapidly). We buckled in and went to the top of the only-open bunny hill. I gave the kids a few tips and we started down the hill. Amy struggled a bit (sadly, she's got her dad's sense of athleticism.) Misha acted like she'd done it multiple times before. Amy and I spent some more time together, but she was really stressed out and it kind of overwhelmed her so she took a break. Misha was going down the bunny hill and back on the lift before I could even find her. She was having so much fun.

We did this a few more times and then went for lunch (free chili for Boy Scout Ski Day). Afte 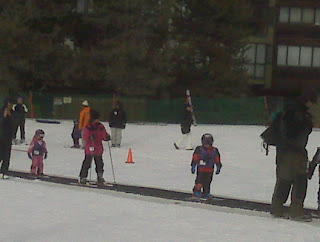 r lunch, I was worried Amy wouldn't want to do anymore since she'd had such a hard time. But she really surprised me and toughed it out the rest of the day. We found another practice area where she could stand on the magic carpet (moving sidewalk) and hone her skills. We worked on it a few times together, and then she spent several hours all by herself working on it. She didn't fall at all and greatly increased he 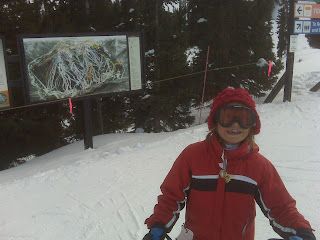 r confidence. I was so proud of her for not quitting despite how hard it was for her. It was one of those rare moments where I was truly proud of a kid. Not in a "that's my girl" kind of way, but rather a button-busting moment of awe.

While I was helping Amy, Misha went a couple hundred yards back over to the bunny hill and was having tons of fun all by herself. She asked me why I came back when she later saw me! I convinced her that she was doing so well that she should try something more challenging, so I took her up the big lift to the top of the mountain; notice her Misha smile. It was cold up there! In typical Misha fashion, she just said OK and figured "I can do that." This is Misha at the top. She pointed her skis downhill and slowly snowplowed all the way to the bottom. In fact, she didn't fall once! Pretty cool. She didn't know it at the time, but one of the sections on the way down was intermediate and fairly steep. She just zig-zagged down the hill without saying anything negative at all 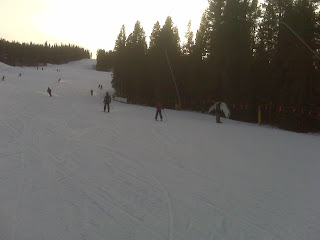 All the way down I was cheering her on with the kind of pride that I've rarely felt towards my kids. I was so proud of them both for what they'd done. They both overcame the limits of what they thought they could do. It was a special day as a dad.

Afterward, we had planned to stay overnight again and skip the bad afternoon traffic. But the threat of a heavy overnight storm changed our minds, so we stopped for pizza, waited out any traffic, and then zipped home without any issues at all. The next morning we were glad for the choice, as there were several inches of snow in Denver, and surely much more in the mountains.

We had a wonderful day, didn't spend too much dough, and indeed bonded. Good weather, good skiing. Mission accomplished. I may actually even take them again! I think I even earned some good daddy points to cash in later when they don't love me so much.
Amy Misha skiing
Chris Kline
I like to share what I learn, and I like to learn from others.

Julie said…
What a fun day! Some of my most favorite moments with my dad have been on the ski slopes or out 4-wheeling. During both activies there were many times when I was silently cursing my dad for taking me out on such hard routes, wondering why on earth he ever thought I could make it. But I always survived and by the ride home I was always grateful that he pushed me to accomplish what he knew I could.
December 8, 2009 at 5:48 PM

Lori said…
This was probably my favorite post of yours. It was just perfect. I think it's great that you're going out of your way to give the girls a chance to start skiing young. I ALWAYS wished I could have done that. Nice work, nice work.
December 9, 2009 at 12:29 PM