Stiff and Sore, But Worth It 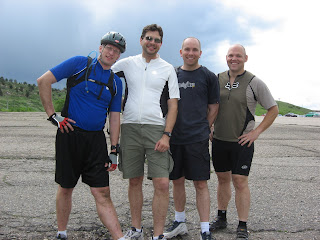 Went biking again today. It was great. I still huffed and puffed all the way up the hill, but felt like it was slightly less puffing than on previous trips, so we'll count that as progress. We did about 10 miles at Hall Ranch and the weather was perfect; overcast and cool, but no rain. I can think of fewer things more fun than riding down the hill almost out of control (but not quite, unless your name is Adam!)
I've come to the conclusion that the ride down is more fun after you've suffered and labored through the ride up. If you take the lift to the top (or that equivalent), it's surely fun, but a little less rewarding since you didn't work for it. Today, we took two circles at the Nelson Loop at the top of the trail to rewards ourselves for all our pumping uphill. The loop runs for a couple miles and is mostly smooth single track with a few jumps and such, and on a great incline such that you can get going pretty fast. Today, my friend Adam was over 30mph coming down that section. That's the kind of adrenaline that says "don't stop!"
Here's some shots that my friend Sam took from our last outing on Memorial Day (to a trail called Apex, which is right behind the Heritage Square amusement park in Golden, CO. 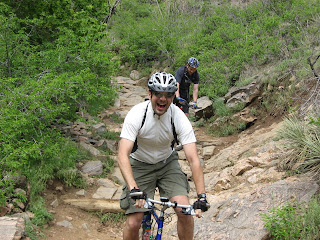 This is my friend Robb, who is always fun to have along. He was getting used to clipped pedals, and it led to some fun pictures as he was a little unsure of things. 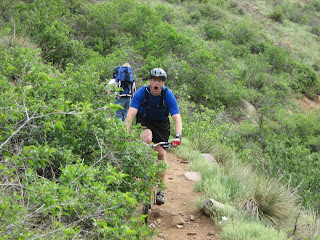 In fact, Sam got a great set of burst shots showing a fairly technical section as we came down. Robb has a great expression on his face right before he crashed. Good thing he made it over the handlebars and jumped down without a scratch. 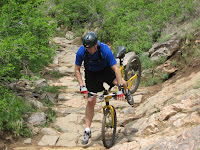 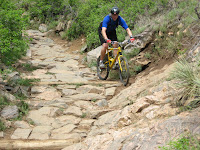 I was wondering in Omaha last week what people do in that part of the country for Mountain Biking. Do they call it "small hill biking" instead, perhaps?
I need a new bike. Thing is, a new bike isn't cheap. Mine is probably 15 years old, and though it's actually in really good shape now that virtually every component has been replaced, it's still older technology and a little too small for me. Anyone want to sell me theirs for really cheap?