Peel Your Grapes, too? 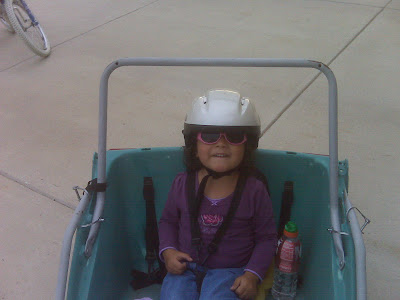 Went for the first bike ride of the season with Amy and Kristen tonight. Amy did 5 miles, which I was proud of. The rain nearly got us, but at least no tornado warnings for the first time in a couple weeks. Kristen, of course, was all too happy to be pulled in her chariot. She was yelling at me "faster dad, faster" and "beat Amy". I wouldn't let her get out and play at the park, though, until she finished her flour tortilla that was her unfinished dinner. So she sat in the trailer for another 15 min to finish the darn thing while I said "faster, Kristen, faster." Payback, baby.
I'm glad this is the last year of the pulling-a-trailer thing. So not cool for my tough-man biking image.
Chris Kline
I like to share what I learn, and I like to learn from others.

Unknown said…
This shows the difference in our life stages: Kenny is so excited for when he can pull Daniel around on a bike:)
June 16, 2009 at 8:51 PM

kevandcan said…
Yea, I have the same kind of sarcasm with my kiddos...I think Ashley and Kristin will have a good time together next month
June 17, 2009 at 6:00 AM