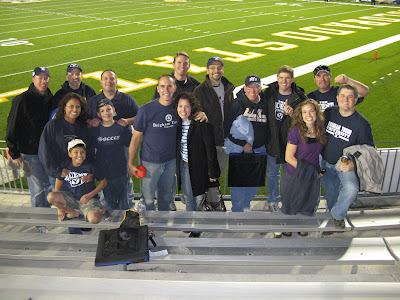 I was able to attend my first BYU Football game in at least two years last night with a bunch of friends. We drove up to Ft Collins (about an hour north) to watch them play an away game at Colorado State. I was surprised at how much beer was flowing at this game. Wow. Nearly everyone in green had at least one cup in hand. Those in blue...not so much. :-) 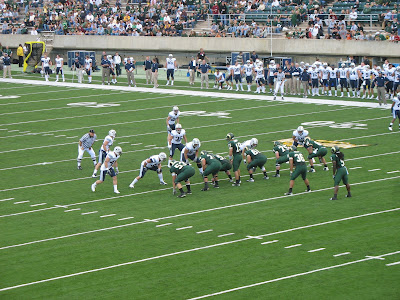 We had a great time. It's a nice field, and we were very entertained by the back-and-forth scoring nearly the entire game. BYU is presently in the top 20 (though we were top 10 before an ugly loss a few weeks ago). It's the first time in a long time that we're back in the national spotlight, and it just raises the fun level for everyone. 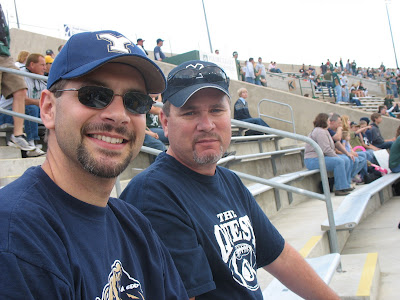 As is often the case, the last 5 minutes on the scoreboard were the most intense, and we wound up coming away happy after a close win. In two weeks we're taking the kids and another large crew down to Colorado Springs to attend another away game at Air Force. If the weather holds, it'll be great fun. If not, we'll practice staying warm.

One neat thing was that at the end of the game, after all the CSU fans made their hasty exit, the BYU players all trotted around the entire perimeter of the stands, high-fiving all the Cougar fans. It was a classy way for them to connect with those who don't often get positive sports role models, and there were a number of kids with beaming faces. These guys are top notch. 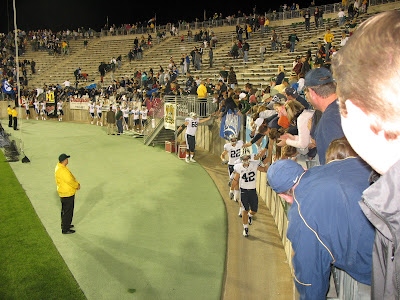 Lori said…
Way to support the ol' blue! I used to go to games all the time... but then i realized that they're cold and my back hurts and im a cranky old stick in the mud, lol. Now that we're going to be moving from the area soon, I'm realizing more and more that I've probably missed out on some good times.
November 2, 2008 at 11:12 PM

Unknown said…
I remember as an usher at the Y games the opposing teams would always ask where in provo to go for a drink after the game. We all told them the Malt Shoppe:).
November 3, 2008 at 7:47 AM

Jolayne said…
Is it just me or does the first picture look fake as though you guys are all photo-shopped onto a football field background?
November 4, 2008 at 12:25 PM