Been a while since I've had any reason (or time) to blog. This one was fun, though. Yesterday, I went to my 3rd BYU football game of the year. The first two were pretty much duds, though still fun. Yesterday's game, though, was altogether different. They finally found their mojo!

I had seats on the front row of the visitor section of the CSU stadium in Ft Collins. 4 foot of legroom in front of me, and polite fans behind me. Couldn't ask for more except for the 35-degree weather. CSU has had a bum season, and all their fans either gave up or just got so wasted they couldn't find their way into the game. Either way, the home side was less than half full at peak, and by mid way through the game, it was an embarrassment.

The game was 100% BYU. 35-0 at half time. Each time the team scored, the TV cameras came over to do the dutiful screaming-fan pan. As we were on the front row, I got face time with every touchdown. I'm not very well practiced as a screaming fan, but I did my best. In the pic below, my friend Chris' brother snapped the shot off his TV when he saw us. Great capture (he must have had a DVR to back it up just right.) 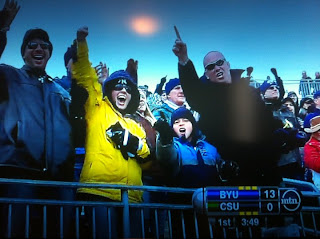 The fun part about it was that I got texts from several friends in Utah who saw us on TV. Hilarious. And not just once. One friend even said we were part of the evening-news highlights out in SLC.

What made the game so fun, though, was Cosmo the Cougar, the BYU mascot. He was an absolute class act. Best mascot show I've seen. First of all, he had real energy. He was pumping up the fans and celebrating every single play. He was also obviously in great shape. He kept jumping up the 8ft wall from the field into the stands and hanging out with the fans and their families. Then he'd jump back down and do a couple backflips. Then he'd do some breakdancing, moon walking, or other 80's era groovin. This guy could dance. And he interacted with the crowd the entire time.

Mid-way through the game, I pointed out to him that the Ram's mascot was over on the other side of the field, not having much fun. He ran over, patting the camera guys' butt, the ref's butt, and the CSU ROTC's guys butts along the way. Then he had a mime conversation with the Ram and started doing pushups (since the ROTC guys usually do them after points are scored). CSU had no points at the time. When the Ram got down to do pushups as well, Cosmo started doing them one armed. Ram couldn't do that. Then they came back over to our side of the field and Cosmo did another back flip. Ram couldn't do that either. Hilarious. Then Cosmo was a gent and gave Ram a hug and let him go without further humiliation. We were rolling with laughter. 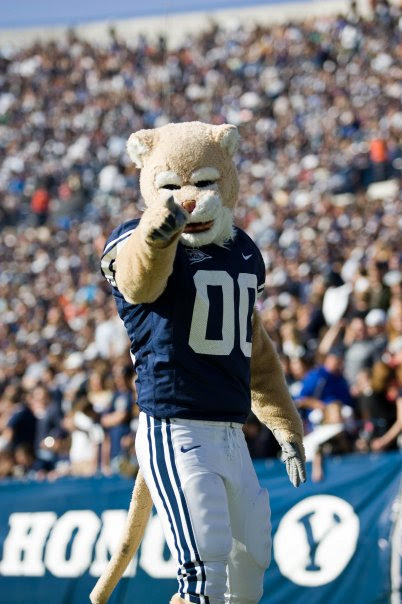 After the game, all the BYU players came around and high-fived all the fans. Nearly all the BYU folks stayed till the very end. The last quarter of the game was an absolute ghost town for CSU. The camera guy showed a snowman that someone had built and placed in a chair all by himself in the stands. The snowman and the band were about all CSU had rooting for them. After the high fives, even Jake Heaps (QB) came over after his obligatory after-game interviews and high fived everyone. Classy.

On the way out of the stadium, something else very cool happened. The stadium had emptied and we were amongst the last to leave. As I was walking out, I overheard a girl who'd been working the concession stands talking to her friend. She was sharing how it was a much better concession day than normal. She said people were polite and not pushy like normal. They even said strange things like "please" and "thank you." Shocker. I couldn't resist, so I butt into her conversation and said that's what happens when BYU comes to town. She agreed and said it was much better than a normal game. Just goes to show that little stuff really does make a difference, and people really do notice. Especially in places where the hometeam crowd is usually wasted and vulgar (CSU fans have a reputation for their obnoxiousness.)

It was BYU's best show of the year, with a strong throwing game. Just what we need to succeed against Utah in two weeks. It was wonderful to hear that the Utes lost to Notre Dame that same time. Most fun I've had at a football game in the last decade, for sure. Go Cougs.
byu football
Chris Kline
I like to share what I learn, and I like to learn from others.

kevandcan said…
Great post Chris - glad you had a great time. And I thoroughly agree with your comments BYU fans/students in general. Quality people.
November 15, 2010 at 6:00 AM