By Chris Kline June 27, 2010
We're having all sorts of interesting home-related things right now, it seems. A couple weeks ago Jo told me to "come here" while she was in the other room in the basement. It was one of those "come here now" kind of inflections, so I complied immediately. I went over and saw a nice fresh hole in one of our window wells. The wells are 5 feet deep or so, so this was surprise. We definitely had an uninvited guest who was a digger. We stood there long enough to even have a welcome-to-the Kline-zoo experience through the glass by watching Mr Digger come up to dump some of this dirt. I think he even smiled at me faintly. My enemy was visible.

Jo looked it up online and found that it was most likely a mole (did I get that right?) We went over to Home Depot and observed a plethora of rodent-killing options (who would have known?) I settled on the pyrotechnic approach and bought gopher-bombs. After all, fire is the answer to many of life's toughest problems, right?

My first try at gopher bombing was, shall I say, ridiculous. You're supposed to stick a fuse into this fire-cracker thing, light it, and then shove it down into the rodent-infested hole. Surprisingly, that's not very easy. I managed to get the fireworks lit, but getting it into the hole didn't work out too well, and I wound up gassing myself pretty well. Yup. Here's my sign. Too bad you just can't fix stupid.

So we moved to plan B. I opened up the hole as much as I could and ultimately had a survey stake down to the point where I heard Mr Digger yelping. No Mercy! I wasn't sure I could finish him off with the stake, and besides, who really wants dead, stinky, plague infested guts smelling up their window well. So I elected not to shish-kabob him. Instead, I wound up getting him into a little box where he made all sorts of interesting noises.

I must have missed in the Be A Good Father brochure where it says that you're supposed to capture large, rabid rodents with bare hands, without getting bit. Happy to say, though, that I've now earned that badge.

Fact for the masses: Mr Digger was much bigger than you might think: 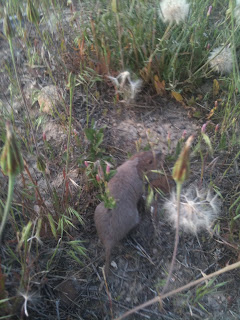 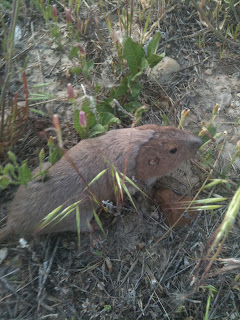 I really wanted to finish the punk off, but the neighbors were out and wanted to see him and I wound up in a short moment of mercy that ultimately saved his life. I rode him on my bike over to the empty neighborhood across the street and let him go. Bet he winds up in someone else's window well shortly. If you see him, get out your 9mm and do what I should have done.
home repair rodents
Chris Kline
I like to share what I learn, and I like to learn from others.

Lori said…
Oh what a softy. I'm glad you didn't skewer him to death, that would have been grossy gross. I'm surprised he was able to dig through such a thick wall! Perhaps he'll appreciate your mercy and tell the other gophs to stay away from the kline's.
June 28, 2010 at 8:11 PM

The Local Guys – Pest Control said…
Thanks for share this blog .This is very useful blog for pest control adelaide rats to me .I like your blog .Thankyou so much blogger .